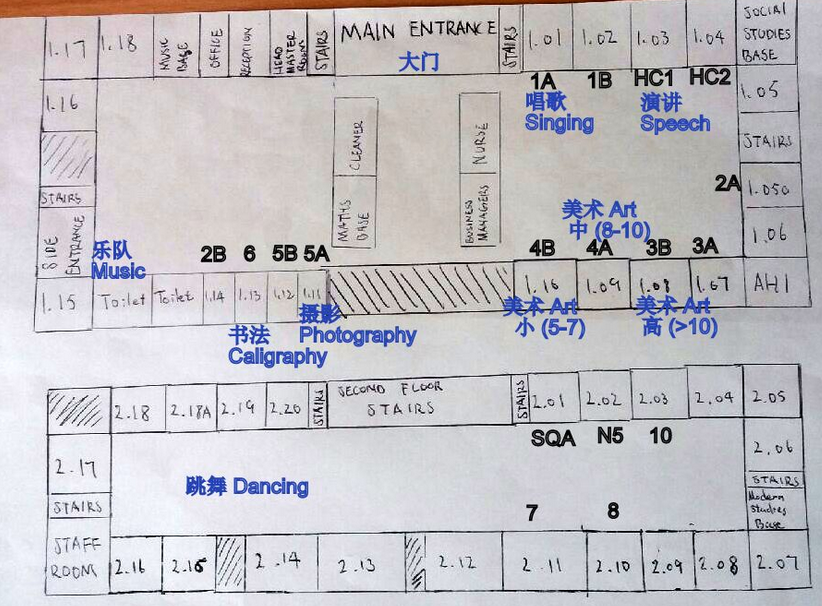 Edinburgh Chinese New Year Concert 2017 was held in the Usher Hall on 25th of January. The concert was organized by the Euro-Asian Association and our school, with support from the Chinese Consulate General in Edinburgh, Edinburgh Mayor, Bank of China, the Confucius Institute in Scotland. 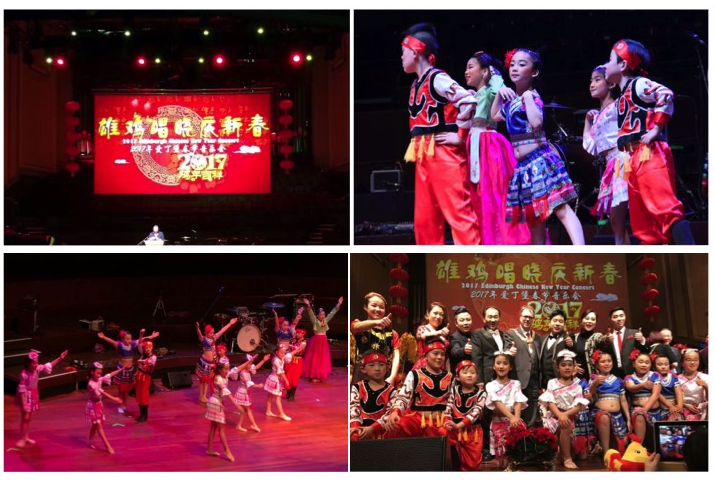 From 5th to 6th November , our school for the first time participated in the annual “Huaxia Cup” Scottish Chinese Sports Games by sending two badminton teams and girls cheerleaders to the Games . The “Huaxia Cup” Scottish Chinese Sports Games 2016 was held in Edinburgh. Dozens of teams from Edinburgh, Glasgow, Dundee, Aberdeen, Stirling competed in sports such as basketball, badminton, Table tennis and other group sports. Although it was the first time for our players to participate the game, they were brave to face strong opponents, and achieved their best results. Especially the 10 young cheerleaders were eye-catching. Dressed in white shirt and black stockings and accompanied by music, they constantly danced to cheer up the athletes and applause for the winners. 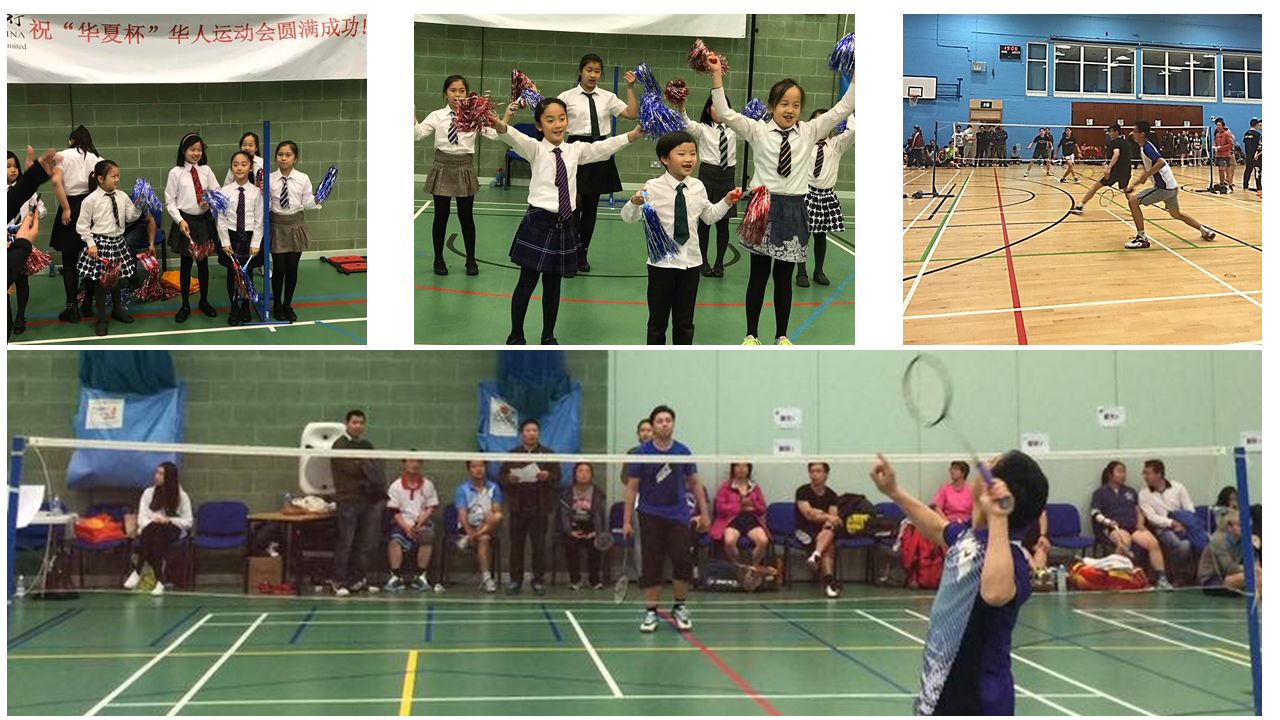 On 10th September, the first “Wan-mei Distance Training Program for Chinese Language Teachers” opening ceremony in the UK was held at our school. The “Wan-mei Distance Training Program for Chinese Language Teachers” was administrated by the Chinese Language Education Foundation, organized by Beijing Fourth High School and sponsored by Wan-mei (China) Limited. Since 2006, the program has been launched in 23 countries, 165 overseas Chinese schools. After the opening ceremony, teachers from our school watched a wonderful HD class on “Introduction and Guidance to the YCT exam”. Our school has chosen 30 HD courses to offer to our teachers with variable topics such as “How to Organize Listening and Speaking in Class”, “Introduction and Guidance to the YCT Examination”, “Introduction to the New HSK Exam” and “Chinese Textbook Analysis”. 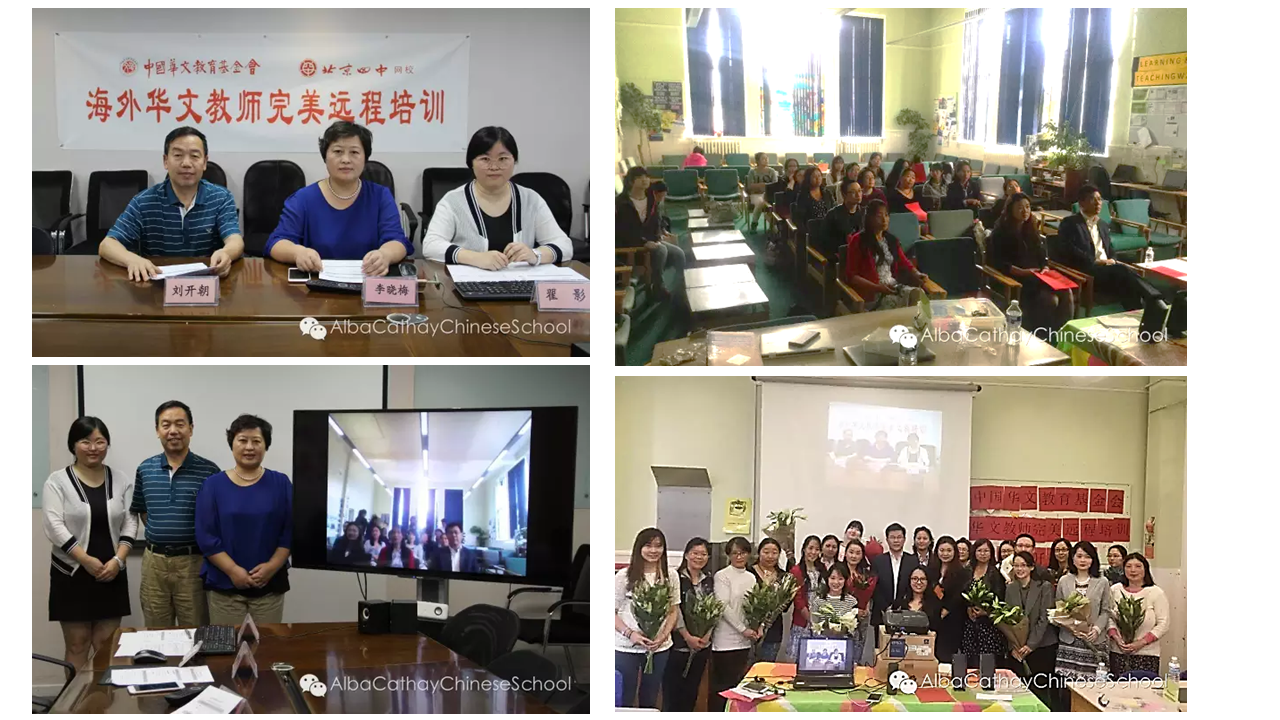 On 4th Jun of 2016, about 30 pupils and their teachers from the Edinburgh Alba Cathay Chinese School took part in the Summer Fair of Sciennes Primary School, which was organised by its PTA; The theme of this year is Multi-cultural ism. Apart from running Calligraphy workshop, we also provided energetic folk dance and wonderful chamber music performance which has the flavor of Chinese and western melodies. All were very popular and successful. It is another charitable and meaningful cultural event supported by our community. 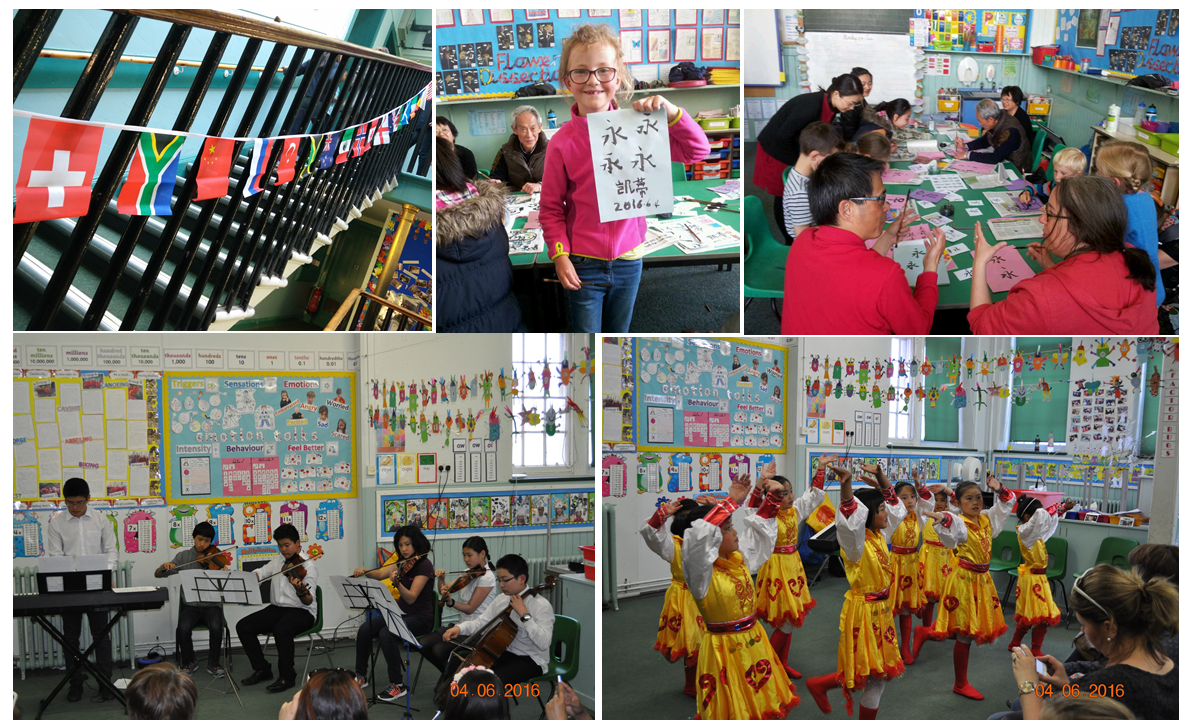 On February 13, about 260 people including teachers, students, parents of our school and guests from other Chinese organizations attended our school’s 2016 New Year Celebration in the atrium. At the party, our students presented a wonderful stage performance. The program comprised children choir, poetry recitation, drama, lion dance, Chinese dance, musical instruments (piano, violin, Bagpipe). After the show, the children participated in the traditional Chinese New Year fun activities including riddles, calligraphy, crafts, Chinese knot. It was a wonderful experience for our children to appreciate the Chinese culture and tradition. 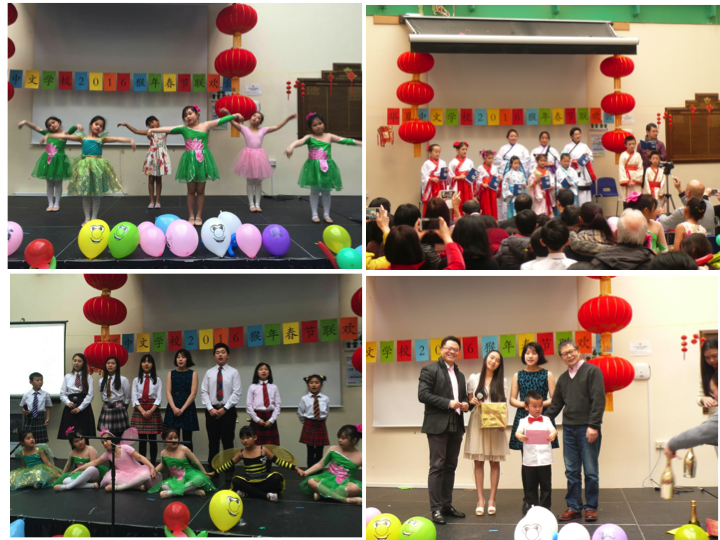 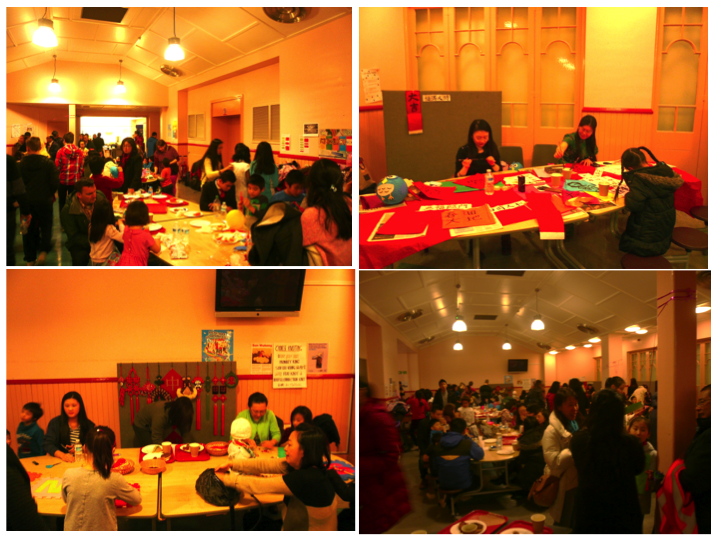 On February 7th, the first Scotland Chinese New Year Celebration was held in the Assembly Rooms in Edinburgh. Students from our school were invited to perform poetry recitation of “Spring”, a masterpiece of famous writer Zhu Ziqing. Their performance won the audience’s applause. 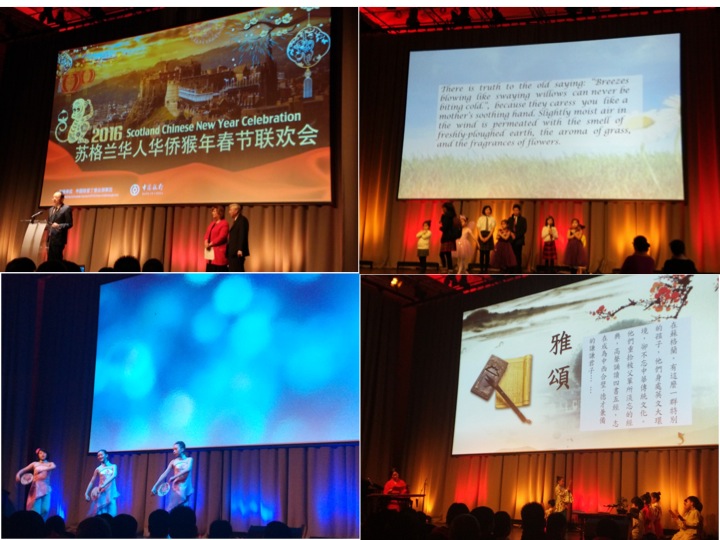 On February 6th, teachers and students from our school were invited to the Edinburgh City Chamber to the Chinese New Year reception. Mayor Donald Wilson, the Consul General of the People’s Republic of China Consulate General in Edinburgh Mr. Pan Xinchun, diplomats from many countries and representatives from local communities attended this event. Students from our school contributed a wonderful program to the reception. SQA class performed dragon dance. The school band played the piece of “New Spring”, bringing a full festival atmosphere. The choir students and parents sang “Auld Lang Syne” and other songs. 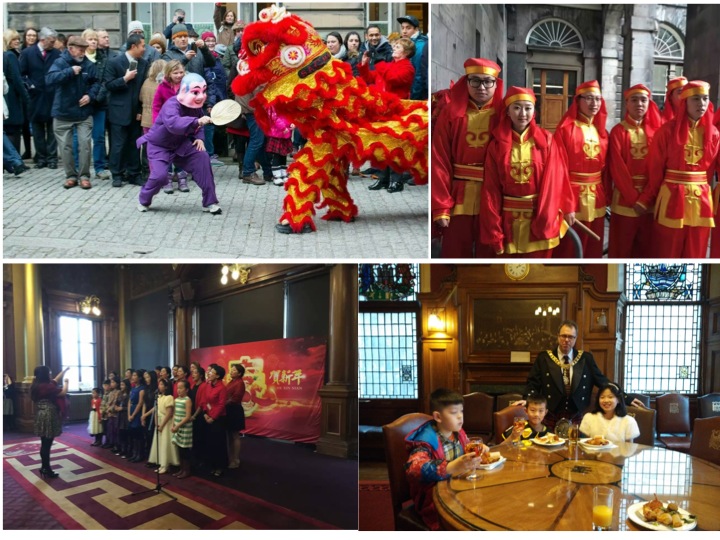 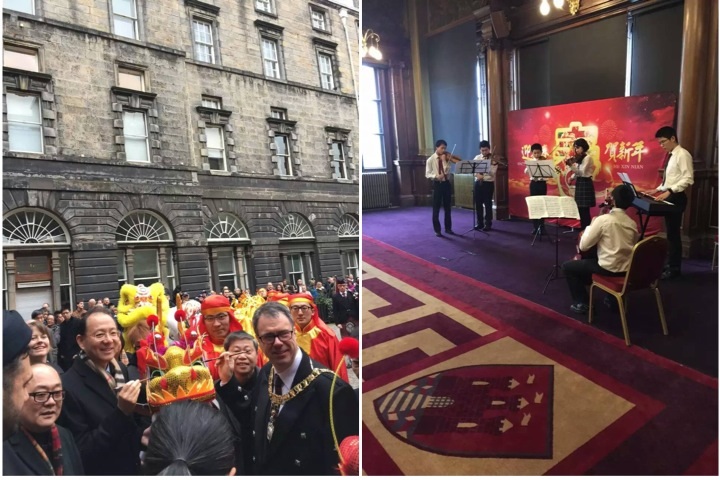 ACCS pupil Yang RuYuan has won the bronze prize with her copy art work “Sunflowers” in the 5th “ShouKai Cup” Painting and Calligraphy Competition for overseas Chinese pupils, which are hosted by the Beijing Municipal Overseas Affairs Bureau. ACCS teacher Mr Yao Hui has won the Outstanding Guidance Teacher award. The school has also been awarded the Outtstanding Organisational Achievement in the competition. 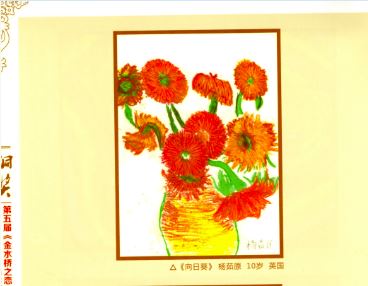 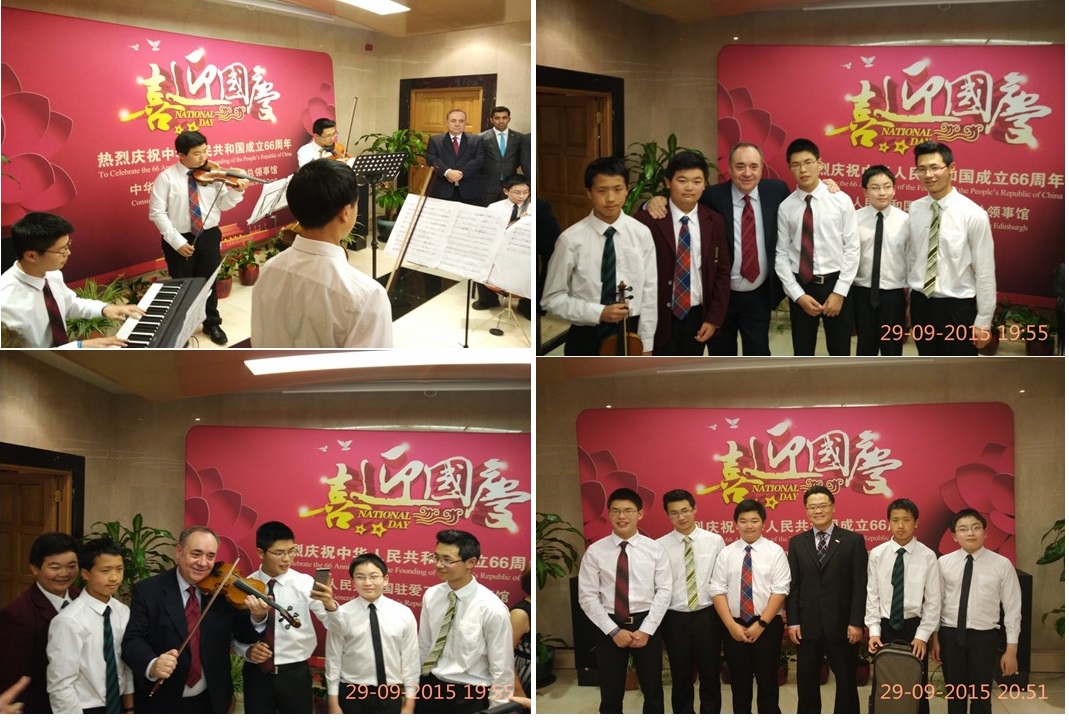 On September 22nd at the Confucius Institute for Scotland in Edinburgh University, two members of board of trustee Mrs Zou Juan and Mrs Guo Huijie presented Dr. Jin Ri the appointment letter of the honorary trustee of Alba Cathay Chinese School. Dr. Jin and Confucius Institute have been a great support to our school over the past years. We trust this new relationship will bring new momentum in Chinese learning and culture activities to the school. 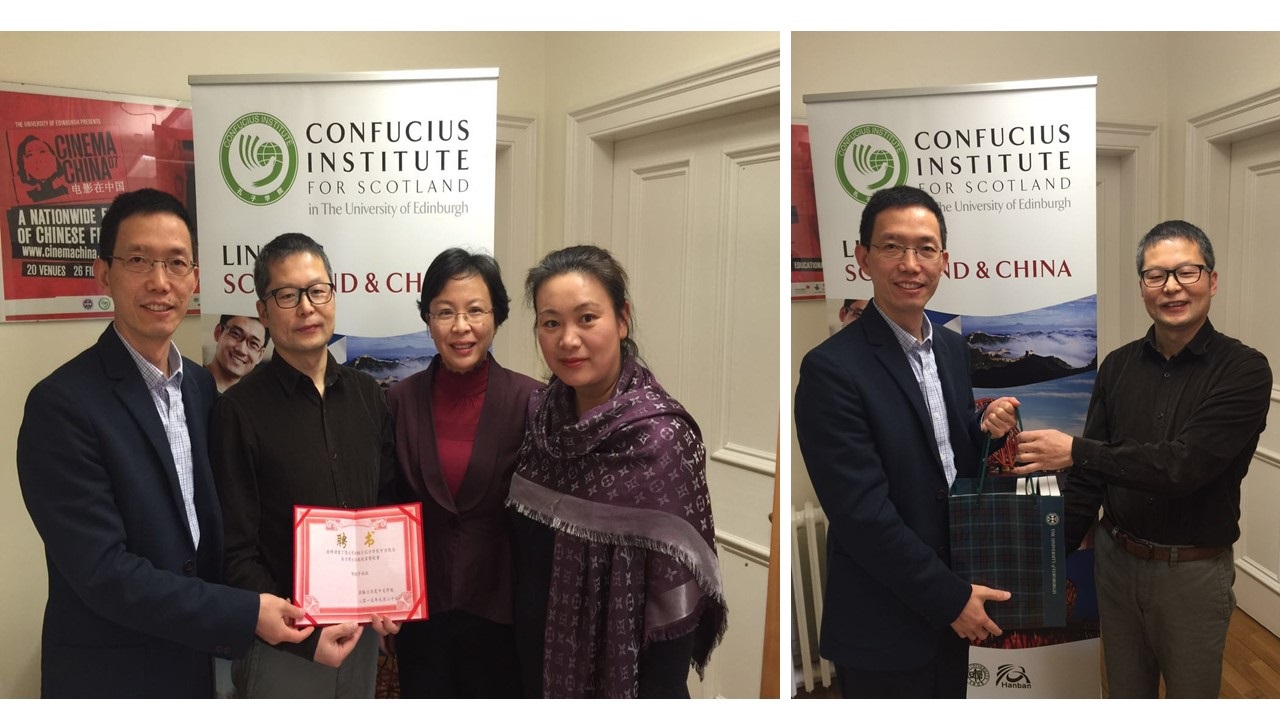 On 30th of August, 10 children from ACCS performed the classic Chinese dance “MU LAN” at the Mela of Edinburgh Festival 2015. 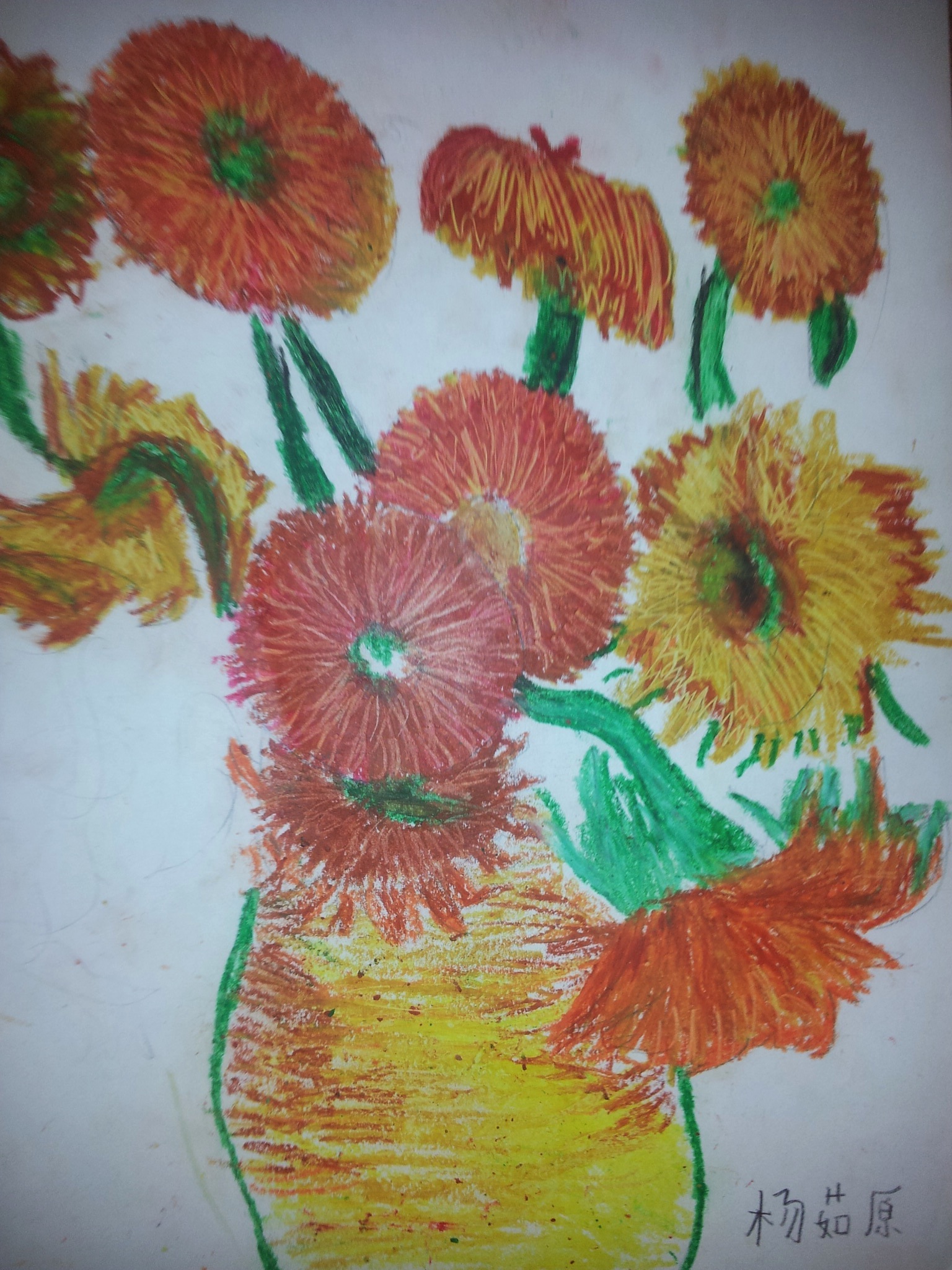 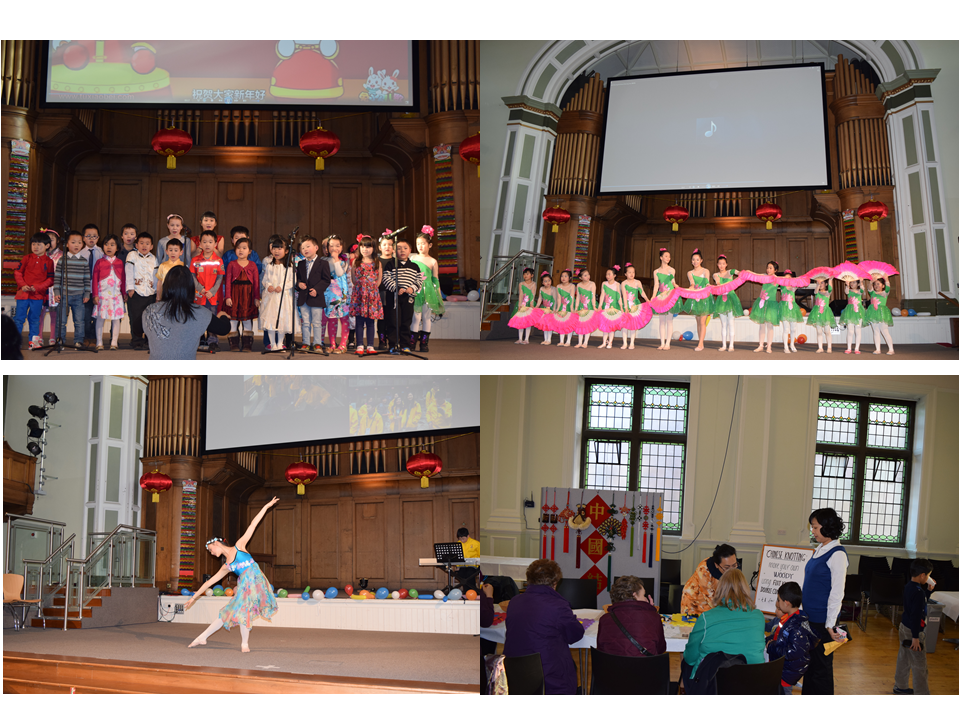